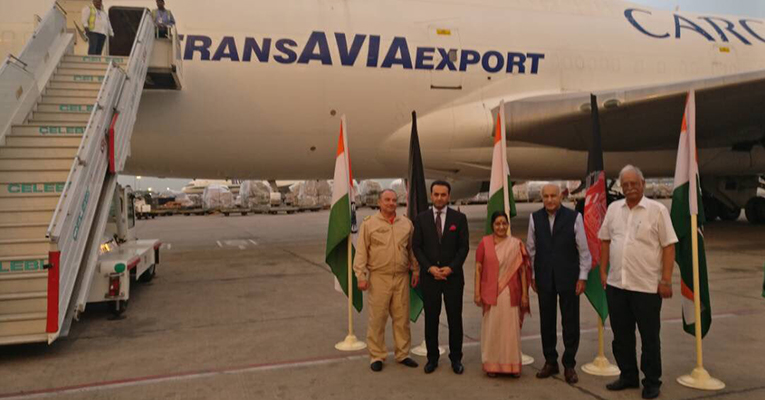 It was jubilant faces that we could see on 19 June in Delhi airport when the first air freight from Kabul landed. More than the success of the first flight touching down, it may be looked as India’s first victory over Pakistan’s muscles stretching to block India’s trade by road with Afghanistan. Pakistan was in an advantageous position as all by surface routes from India to Afghanistan passes through Pakistan.

The much talked about India-Afghanistan air freight corridor took shape during the meeting between Prime Minister Narendra Modi and Afghan President Ashraf Ghani in September 2016. And the detailed plans were worked out when both the country heads met at Amritsar for the regional summit. The following six months were crucial for both the countries to make it a reality. It is understood that necessary over-flight permissions were taken as it flies over Pakistan sky.

It was earlier reported that the first flight from Kabul would take off on June 15. But the first flight took off from Kabul on June 19 marking an imprint in the history of air freight between the two countries. With the air cargo corridor in operations, it is now estimated that the trade between India and Afghanistan would touch the $1 billion in the next three years from the current levels of $800 million.

While President Ashraf Ghani inaugurated the air corridor from Kabul, India’s Foreign Minister Sushma Swaraj and her deputy MJ Akbar was at the Delhi Airport along with Ashok Gajapathi Raju, India’s Minister for Civil Aviation, to receive the maiden flight. 60 tonnes of asafoetida or commonly known as hing worth $6 million dollars was the first set of cargo. The Indian Prime Minister welcomed the first flight by tweeting, “Direct connectivity between India and Afghanistan will usher prosperity. I thank President Ashraf Ghani for the initiative.”

t is now believed that the trade between the two countries is set to improve tremendously and also give Afghanistan a greater access to Indian markets. Currently, Afghanistan uses the Karachi Port for its exports. And export via road service to India is through Pakistan. Though the movement of cargo from Afghanistan to India via road is allowed, however, import from India on the same route is prohibited by Pakistan.

Recalling here the much talked about TAPI gas line (Turkmenistan-Afghanistan-Pakistan-India). For energy-starved countries like India and Pakistan, TAPI would be the best solution. The pipeline which was conceived in early 90’s had hit many roadblocks in the past. After much delay, it is now believed that the line would be a reality in 2020. Some section of the industry is still sceptical about the line coming online, owing to the resistance from Pakistan, rising security threat because of ISIS penetration in the region, etc. However, the project geared momentum when Prime Minister Narendra Modi visited Turkmenistan in 2015 July.

So if everything goes as planned, India will have a boost in a trade to Afghanistan in the near future and attain energy security once TAPI becomes alive.